Don’t miss out, if you are in town!  Amusez-vous bien!

While I was in Montpellier, I attended an International Fair that was being held in a large exposition hall. There were goods representing a multitude of countries, each with its unique style and presentation of items for sale: clothes, flowers, household items, interior design, and much more.  It was huge and literally overwhelming, as I walked up and down the aisles. The most unusual thing was slimey, jellied cubes (but not wet to the touch) to put plants and flowers in; color could be added for decorative effect.

I didn’t find anything I couldn’t live without, but certainly enjoyed looking! See anything in the photos you would have purchased? 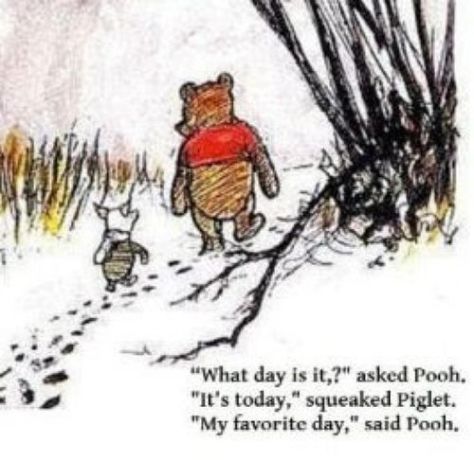 Following the arrival of Le Beaujolais Nouveau wines, came the Fête de la Châtaigne (Chestnut Festival). “Jack Frost” wasn’t exactly nipping at our nose (temperature was in the low 60’s), while enjoying the local artisan market, featuring regional products, traditional cuisine, and wood cutting demonstrations. The streets were closed off to traffic, so that the restaurants could set out tables and chairs for everyone to relax and enjoy the festivities.  Bonne fête!

Some thematic background music to play while looking at the below photos:

I recently visited the town of Thuir, not far from Perpignan and in the most southern area of the Languedoc-Roussillon region. The sidewalks in this town are marble; the town was full of charm.

Thuir is home to “les Caves Byrrh” that houses the largest oak vat in the world (1,000,200 liters) in its production of “Byrrh,” an aperitif wine since 1873. I took a guided tour and learned it was first used medicinally as a tonic, as it contained quinine, and was sold only in pharmacies. The mixture of a variety of spices and zest (orange, cinnamon, coriander, cocoa, and coffee) gives each type of wine its unique flavor; the company also produce Dubonnet, a dry vermouth.

Of course, I did a wine tasting after the tour, and ended up buying a bottle of “SOHO” liquor, flavored with cherries and ginger, which could be added to champagne – sounded delicious and definitely ‘sold’ me!

The holiday season is always a fun time of year, and Nice certainly get dressed up in her finest.

Here’s what year 2011 Christmas looked like around the town:  featured are Place Massena with the annual Christmas village, Place Garibaldi, and the Promenade des Anglais.

About 4 kms. from Montpellier, the town of Castelnau-Le-Lez has a population of about 15,000 and is served by Monpellier’s 2nd tramline. Le Lez is the name of the local river, which gives the town its name.

The town of Castelnau is home to l’Eglise Saint-Jean-Baptiste, a church which dates from the end of the 16th century, and has a 14th century bell tower.

As I was walking around the town, I noticed seashell markers called “Coquilles Saint Jacques de Compostale” on the sidewalks, as a way to indicate the pilgrimage route in the Middle Ages from Campostale to Lourdes (see map photo).  The scallop shell has long been the symbol of the Camino de Santiago. Over the centuries the scallop shell has taken on mythical, metaphorical and practical meanings.

Two versions of the most common myth about the origin of the symbol concern the death of Saint James, who was killed in Jerusalem for his convictions about his brother.

Version 1: After James’ death, his disciples shipped his body to the Iberian Peninsula to be buried in what is now Santiago. Off the coast of Spain a heavy storm hit the ship, and the body was lost to the ocean. After some time, however, the body washed ashore undamaged, covered in scallops.

Version 2: After James’ death his body was mysteriously transported by a ship with no crew back to the Iberian Peninsula to be buried in what is now Santiago. As James’ ship approached land, a wedding was taking place on the shore. The young groom was on horseback, and on seeing the ship approaching, his horse got spooked, and the horse and rider plunged into the sea. Through miraculous intervention, the horse and rider emerged from the water alive, covered in seashells.

The scallop shell also acts as a metaphor. The grooves in the shell, which come together at a single point, represent the various routes pilgrims traveled, eventually arriving at a single destination: the tomb of James in Santiago de Compostela. The shell is also a metaphor for the pilgrim. As the waves of the ocean wash scallop shells up on the shores of Galicia, God’s hand also guides the pilgrims to Santiago.

The scallop shell also served practical purposes for pilgrims on the Camino de Santiago. The shell was the right size for gathering water to drink or for eating out of as a makeshift bowl.    (Source: Wikipedia)

I enjoyed strolling along the pedestrian zone, with the sights and smells of the local bakery, flower shop, and other stores, as  locals leisurely went about their shopping.  Have you ever tasted a “coing” (quince)?

Calling all gourmets, gourmands, and foodies!

November 23-26, 2012 will mark this year’s gastronomy exposition in Monaco, showcasing wines, champagnes, caviar, chocolate, truffles, seafood, and other authentic specialties and exotic tastes from the regions of France and from Europe, as well as table settings and original gift ideas. Just in time for the holiday season!

Link to a similar festival “foire”

I was meeting a friend near Perpignan, and had booked a room at the same place she had chosen, just 15 km.  She had rented a car at the Perpignan train station, but we arrived on a Sunday, and so, the car rental agency was closed.   She would have to go to the Perpignan airport to pick up her reserved rental car; we found the taxi stand outside the train station.  However, it was lunchtime, but luckily, one of the drivers was nice enough to take us to the nearby airport.

Apparently, the car rental receptionist was not so friendly, until my friend started speaking in French  and then, all went well.   She finally got the rental car, and we took off towards the center of Perpignan, or so we thought…..due to road construction, that exit was blocked, and we ended up circling for about an hour trying to find our way – always ending up back near the airport.  This was annoyingly amusing, but getting serious, since our time was running out to be served lunch at most places in France.  We finally found a town square in Perpignan (at least, I think that’s where we were) and had a good lunch at some outdoor cafe. We stratagized on how to get out of where we were, in heading the right direction, over a glass of wine.

OK, the next hurdle was to find the Peu de Causse B&B in the small medieval village of Sainte-Columbe-de-la-Commanderie, 15 km (9 miles) from Perpignan, so onward we went.  I can’t tell you how many roundabouts we took (stopped counting) looking for the B&B village signs (weren’t any). when I phoned the B&B, the owner said it was difficult to give directions from where we were — pardon?

So, you ask, why didn’t we use a GPS?   Well, we had two going at the same time (a Garmin with a woman’s voice and the car GPS with a man’s voice) – a true battle of the sexes, but neither had a clue about the blocked routes! We were even starting to call both of them a few choice names.  We thought about opening the Michelin map iPhone app to make it really interesting, but refrained.  Finally, using a good old-fashioned paper map, we found the B&B.

By now it was “apero” time, so we drank some Muscat (free, small sample bottle) as we sat in the center of the stone-walled courtyard and took a deep, relaxing breath.  We had dinner reservations somewhere, but we would worry later about how to find the restaurant, not to mention returning in the dark of night.  I was hoping that maybe, just maybe, the GPS man and woman would be  “night owls” and therefore, more helpful!

All in all, it was a nice stay in a renovated stone farmhouse, with a delicious breakfast served, in a quiet area near Thuir – personal note:  a car is a necessity…not sure about the GPS though! 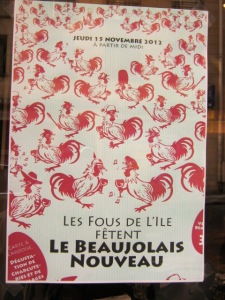 Poster in a Paris restaurant window

Midnight (not a stroke before) on the third Thursday of November (today!) marks the (legal) release in France of the wine produced from the first harvest in the Beaujolais area, located in the southern Burgundy region of France. The wines are shipped around the world, coordinated to be just in time for the wines’ grand opening.

This young wine, due to a shorter fermentation time, is made from Gamay grapes and tends to have a light, fruity taste.  It is meant to be drunk as a young wine, not one to be stored for a long time, so Santé! 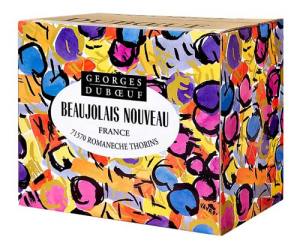 I equally enjoy the release of the new Beaujolais labels, which are usually very colorful and sometimes amusing – Georges Duboeuf being one of the more well-known.