Louis Alphonse of Bourbon, Duke of Anjou is recognized as the “Head of the House of Bourbon” and rightful claimant to the French crown by the Legitimist faction of French royalists who also considered him as the senior male heir of Hugh Capet, being the senior descendant of King Louis XIV of France (ruled 1643–1715) through his grandson King Philip V of Spain.

If the French throne were restored, Louis Alphonse would become King Louis XX of France. Louis was born in 1974 in Madrid. He is a great-grandson of King Alfonso XIII of Spain and first cousin once removed of King Juan Carlos I of Spain. He is the successor of the 10th generation from Louis XIV and the great-grandson of the King of Spain, Alfonso XIII.

His supporters usually call themselves legitimists, one of two claimant parties to the extinct throne of France. On February 7, 1984 Louis Alphonse’s older brother Francisco died as the result of a car crash. From then on, Louis Alphonse was considered to be the heir apparent to his father, according to the legitimists.

He was invested with his titles by his father, Monseigneur Duke of Anjou and Cadiz. Among those titles are Duke of Touraine, Duke of Bourbon (this followed the accidental death of his older brother François, age 12), and finally head of the House of Bourbon following the death (also accidental) of his father in 1989.

Perfectly trilingual (Spanish, French, English) with considerable knowledge of Italian and German, he obtained his diploma from the French high school in Madrid and studied economy and finance at the university. Like all Bourbons he is athletic and excels at riding, ice hockey and swimming.

He is an ordinary citizen and currently works in a large international bank in Venezuela and makes frequent visits to France where he has presided over sporting, historical and cultural events in Paris, Versailles, Metz, Marseille, Brest and Vendée.

In November 2004, he married 21-year-old Marie-Marguerite Vargas, a young Venezuelan descended from the Spanish conquistadors, whom he met while a student in Madrid.  They have a daughter and twin sons together. (see photos below)

Louis Alphonse is recognized as His Royal Highness by the French Minister of Justice.

Comments he made during an interview:

“I am Royal Highness both in France and in Spain. In France it was the result of a court decision following the death of my father.  Not only do I have the right to bear the title Duke of Anjou…but also Royal Highness. On my birth certificate is the title royal highness, because my father was royal highness, and my brother who died also. It is also on my ID and my diplomatic passport.

From my father I inherited the hereditary right to the throne of France.  It is an historic and cultural heritage that I consider very important with obligations that I must fulfill. It is obvious that my wife Marie-Marguerite will be at my side.

I am the eldest of the Bourbons, that’s all…We are, that’s all and by virtue of this we assume fully our heritage…Grandeur is not in me, but in the moral heritage that falls to me.

…Sovereignty. That is the highest social function and no State can be without a sovereign. The choice of sovereign determines what the society will be and gives meaning to the State. You can be sure that for tomorrow and for the young who will have to build the new century and give it its values, I will know how to take my responsibilities and assume the heritage of tradition.

The future will be what we make of it…History is there to remind us that there are no irreversible situations.”

Does the monarchy have a future in France?

Yes, perhaps. It contains everything that is lacking today: longevity, the possibility to foresee and to act for the long term; its independence allows it to be an arbiter, a conciliator…because it’s a family, the dynasty reenforces family values in people’s minds; it restores the notion of the sacred, expressed or not in a confession. It is the bearer of the future; having learned, through the centuries, to adapt to the demands of every era, there is no reason why it cannot regain its capacity for adaptation, its mobility.

My favorite place to be is the Chateau de Versailles, with its opulent Baroque decor and grandeur.  So, not surprising that I recently spent some time there during my trip to Paris.  This time, however, I did a “visite-conférence” – a one-and-a-half hour guided visit, which included access to the private apartments of Louis XV and Louis XVI, the Royal Opera, and the Royal Chapel – areas  not permitted to visit with the general admission.  You can reserve the “visite-conférence” online (recommended) for the guided visit in English or in French.

My favorite “Louis” is the XIV, and with the chateau being his signature piece, his visual presence is seen everywhere.  I love the dress and music of that period (video below).  As the “Sun King,” he was golden and the gold-leaf decor equally resonates throughout the chateau. Vive le Roi –  “My Louis”!

Seeing that the Le Ballet des Fees de la Foret de Saint-Germain was being held at the Versailles Royal Opera during my recent trip to the area, I thought it might be fun to attend and watch a little classic ballet (read Baryshnikov).  I love baroque style decor, and this is the place where Queen Marie Antoinette performed – I was very excited!

The Opera was dimly lit and bigger than I imagined, although not huge, as I was escorted to my ground floor seat. 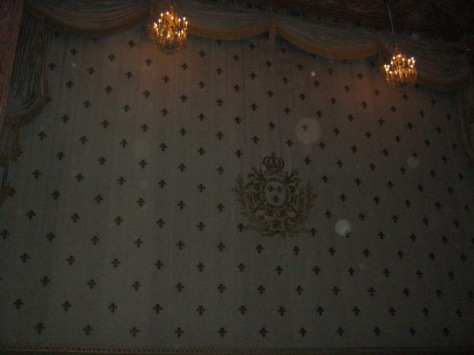 The orchestra music began, with works right out of the time of Louis XIV and Molière, and I felt transported back in time.  The cast acted out a theatrical play, including Cirque de Soleil-type acrobatics and entertaining feats. What an absolutely delightful surprise – it was so well done and truly entertaining! (videos below)